When it comes to the best shoes to wear in winter, it should be all kinds of boots. Every man should keep a pair of boots to protect him from the cold! 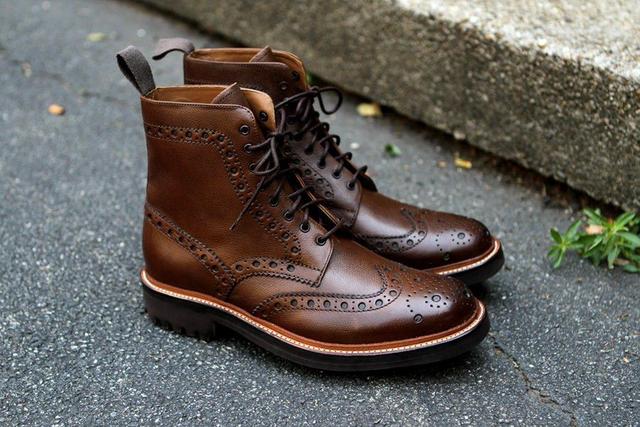 Today we are going to introduce you a delicate and tasteful Brogue Boots. 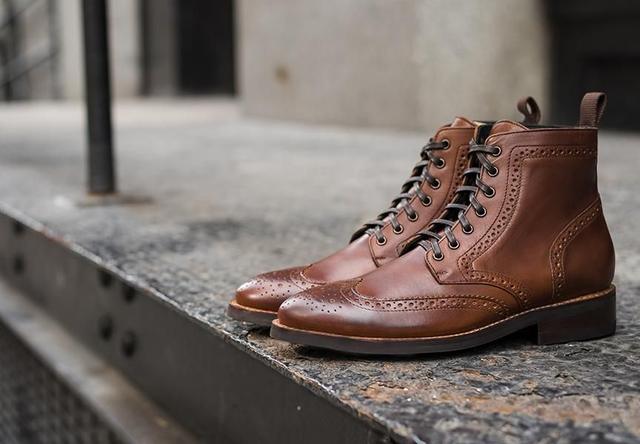 The Brogue boot is not technically a boot shape, but a decorative craft. brogue definition can be any type from a Chelsea boot to a work boot. But do not belittle this a little carved design, a pair of tough rough boots with this little pattern, boots can be immediately from the American tough guy, into the British gentleman. 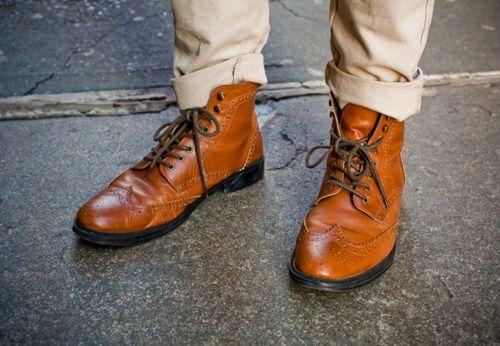 The Brogue is actually a hundred years old. Back in the 16th century, brogue definition were only worn by Irish and Scottish workers. Those classic and beautiful hollows are used for drainage. At that time, wearing such carved shoes was even despised as “rustic”. 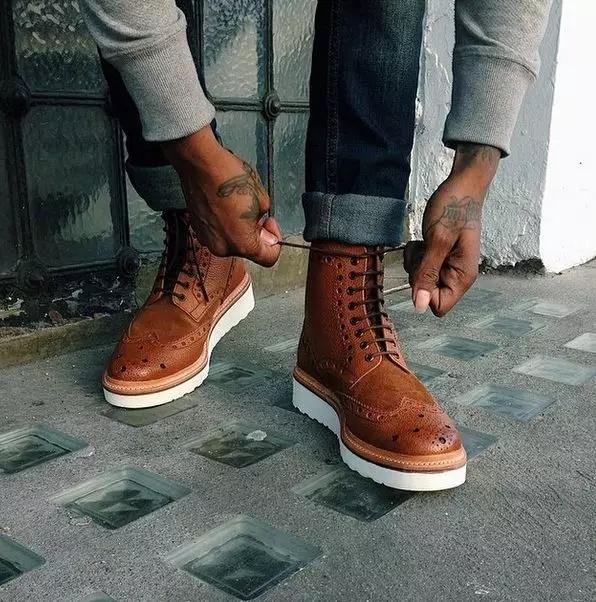 After a hundred years of transformation, Brogue was gradually accepted by European and American men and gradually integrated into the classic brogues of formal wear, becoming a symbol of gentleman status. Until the middle of the 20th century, the Brogue technique became a design element for women’s leather boots. Today, the Brogue is one of the British gentlemen’s favorite shoes.

The traditional Brogue toe has a delicate floral nail pattern that transforms a stiff three-piece joint into a sleek wing. It is a symbol of gentlemanly status and a perfect way to wear a suit on a formal occasion. Through the centuries the great wheel of The Times kept turning. There have been thousands of designs along the way. But in spite of all the different forms, it is also the same. This refers to the two forms of carved shoes, they seem to be similar, but in the pursuit of meticulous and other cultural aspects of the upper-class faction, to set up their own portal, to reflect the ultimate rules of the upper class. 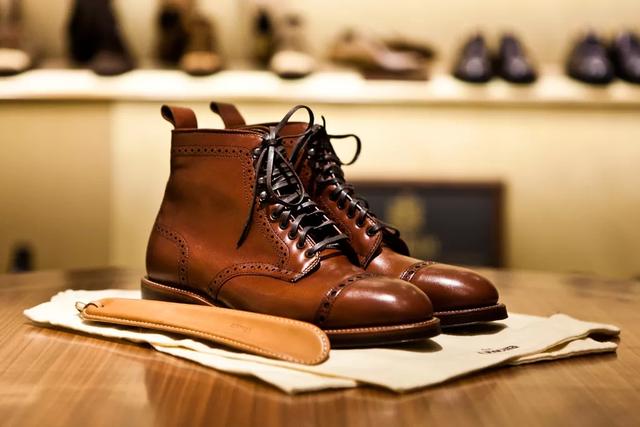 The Brogue can also divide into full Brogue, half Brogue, quarter Brogue and long wing Brogue according to the area covered by the pattern. The less carved area, the more suitable for formal occasions.

A Full Brogue, as the name suggests, is a style in which the entire shoe is adorned with carved details. The most obvious feature, of course, is the “W” toe cap. The piece of leather on the toe cap will have Medallion perforated details. The most authentic full-cut shoes take on a zigzag shape at the edges, known in the United States as a Wing Tip.

Half brogues derby and full carved shoes have a lot in common, such as the shoe body and heel and so on position carved details. The toe cap of the Semi Brogue, however, is in a straight line, and the leather is also decorated with Medallion.

With an outline almost identical to the semi-carved shoes. Even all the carved details on the shoe are exactly the same. The only difference is that the toe cap of the quarter carving shoe is not decorated with any carving.

The less Punch Toe Cap Brogue a shoe design has, the more appropriate it is for a formal occasion. According to some fashion books, the more patterns you carve, the more you move toward casual wear. It’s fun to dress like this. 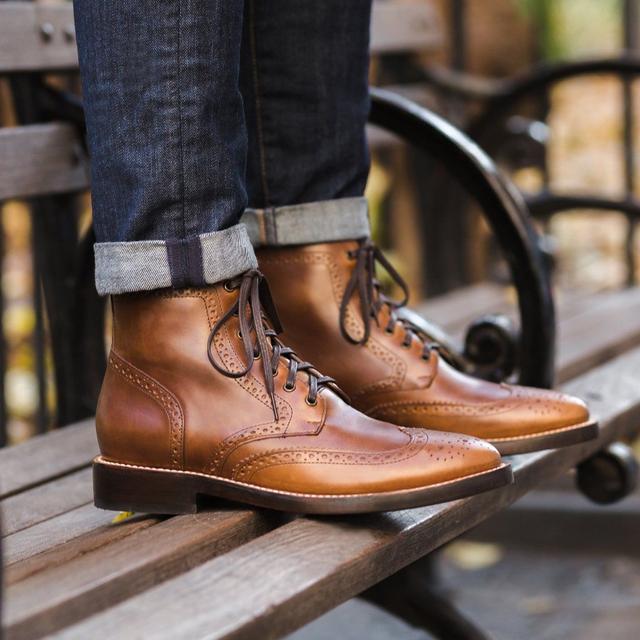 Boots are evergreen in autumn and winter. A pair of sculpted boots will not go out of fashion for years. Brogue boots with carved patterns are a great way to show a man’s mature taste. Brogue boots are popular not only for formal occasions but also for everyday wear. 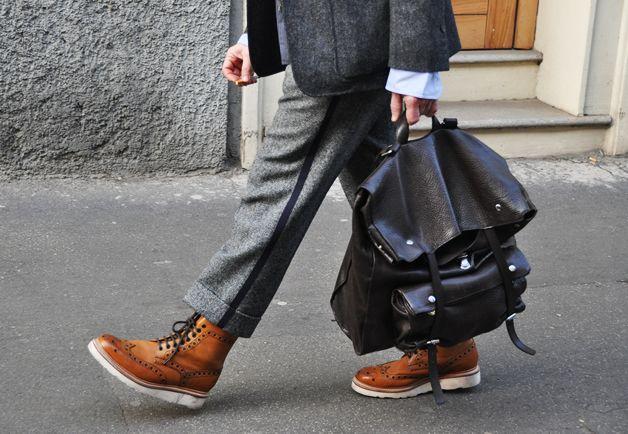 Carved boots are not only easy to walk and wear, but also create a refined first impression of a gentleman. A pair of decent carve pattern boots can street, gentleman, costly and daily, it is one of male essential shoe money. 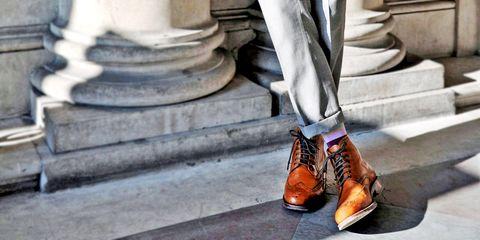 Jeans and carve flower pattern boots are the least error-prone combination that can be fully integrated into a casual style. 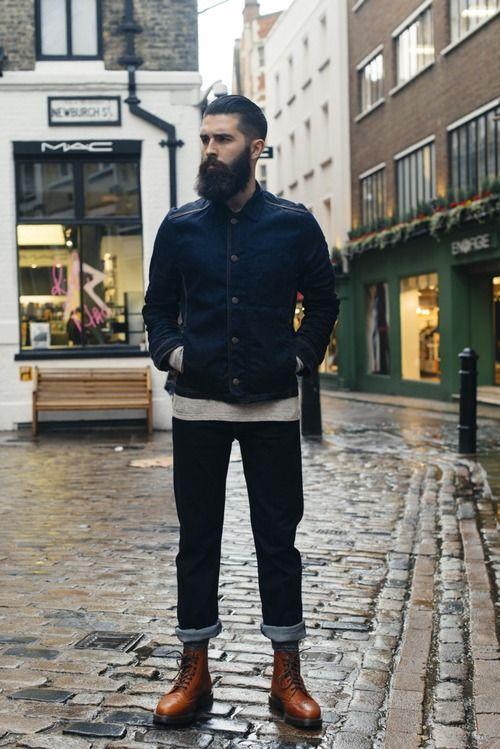 Need to pay attention is must pull up trouser, not only classic contracted and durable look.

With a woolen coat and a gentleman’s hat, it’s very British. Carved boots are a pair of leisure can be a gentleman’s versatile boots. 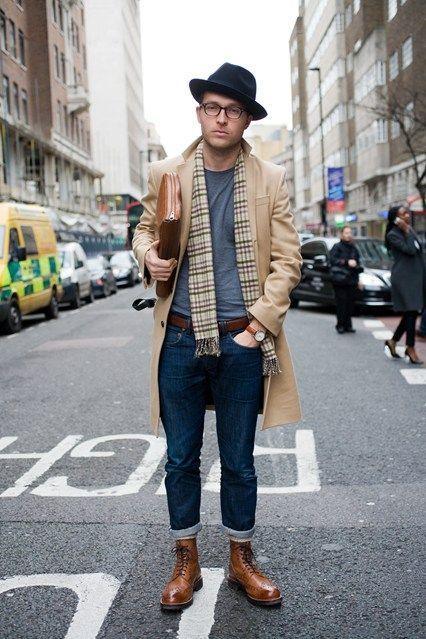 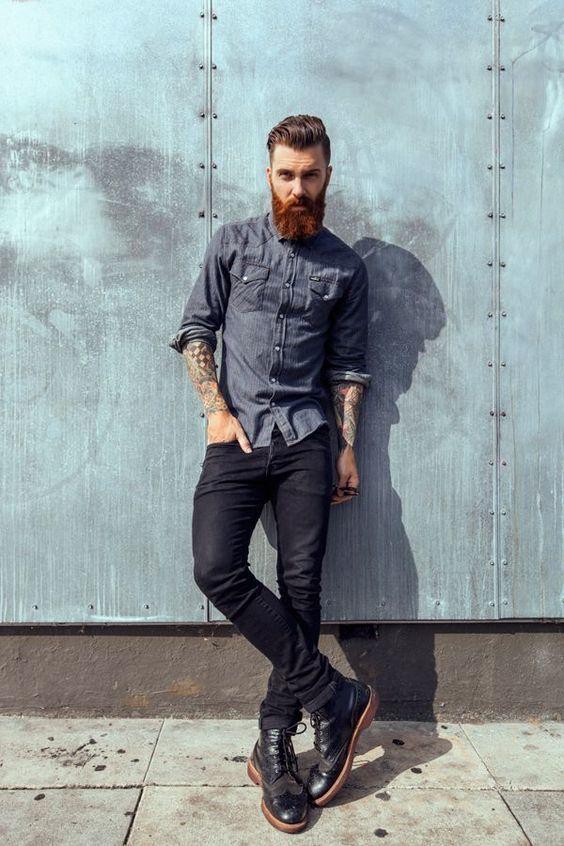 In addition to regular loafers and oxfords, actually still can match this kind of tough carve flower pattern boots. 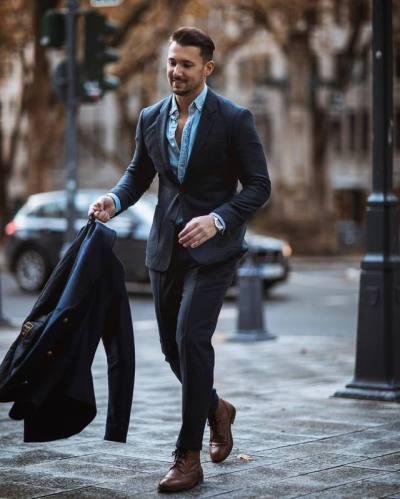 The point is to be sure to choose nine-point pants, slightly exposed boots can add to the overall look. 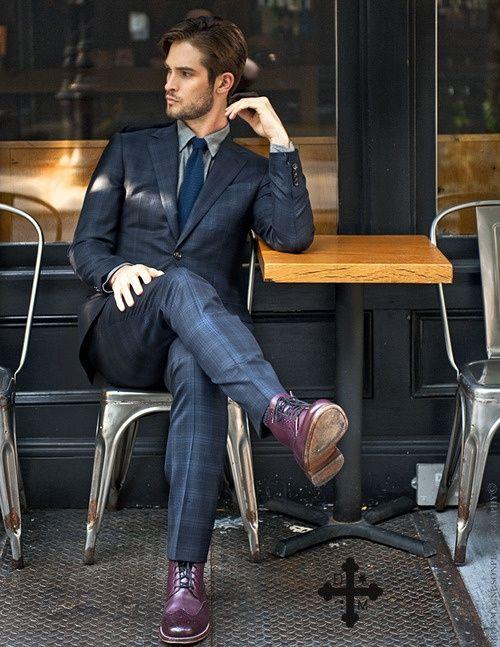 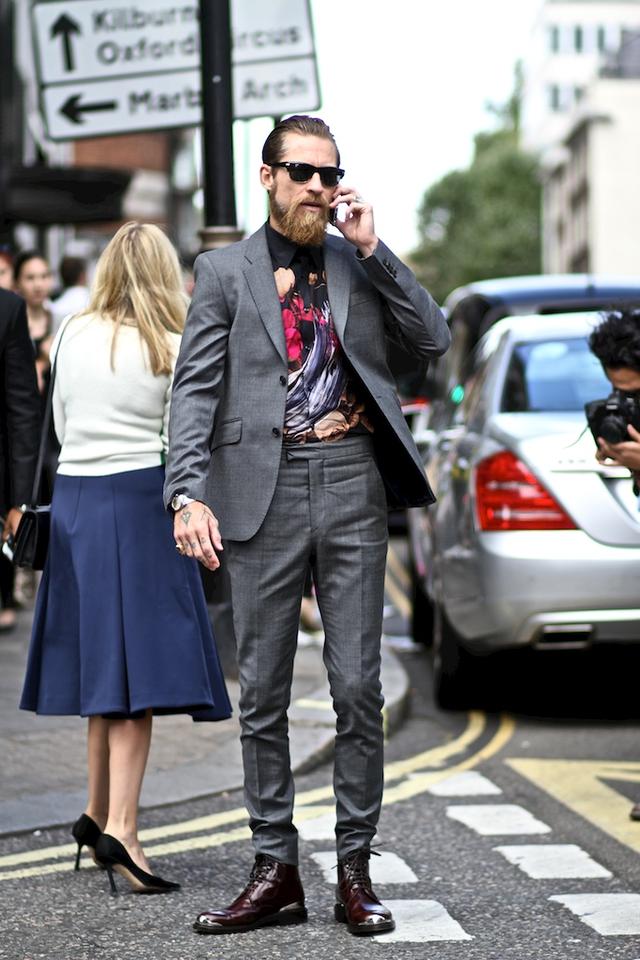 The special thing about the carved boots is that they combine elements of gentleman and military. So you don’t have a problem with overalls. 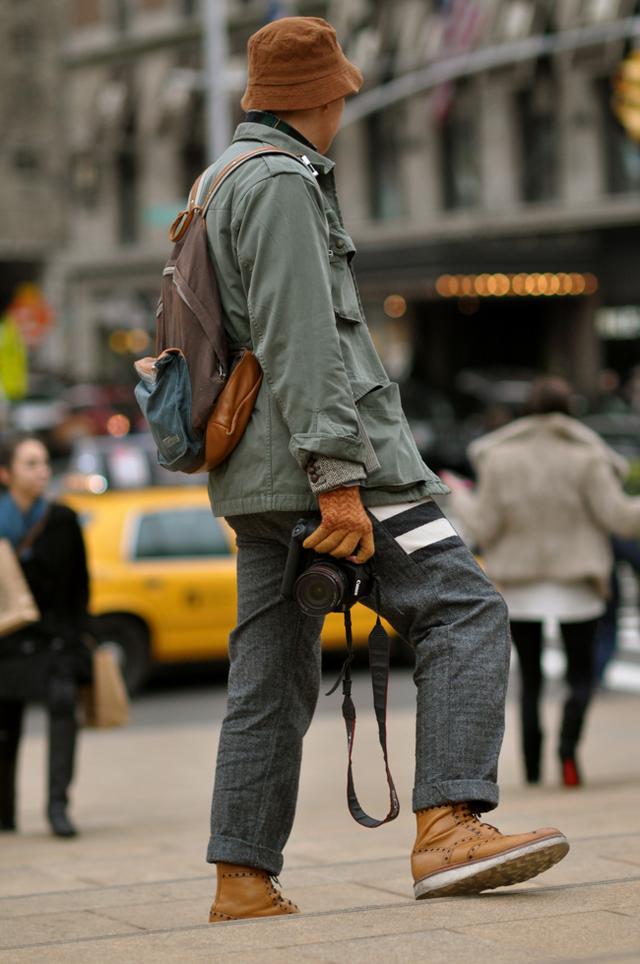 The trouser legs are tuck into the socks to highlight the military style. 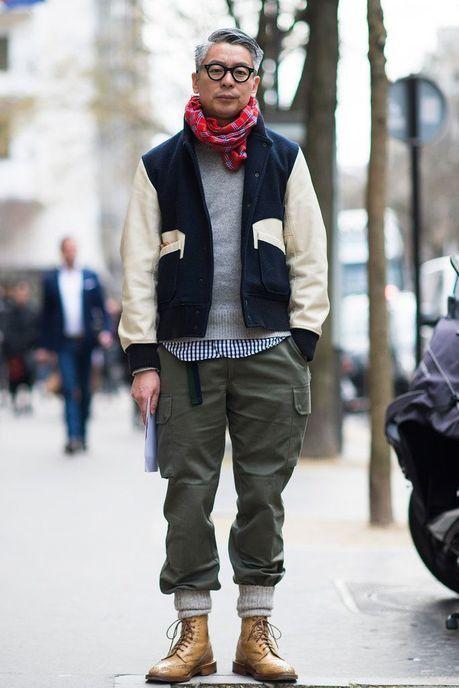 Be sure to opt for nine-cent trousers, or pull them up to reveal the upper. 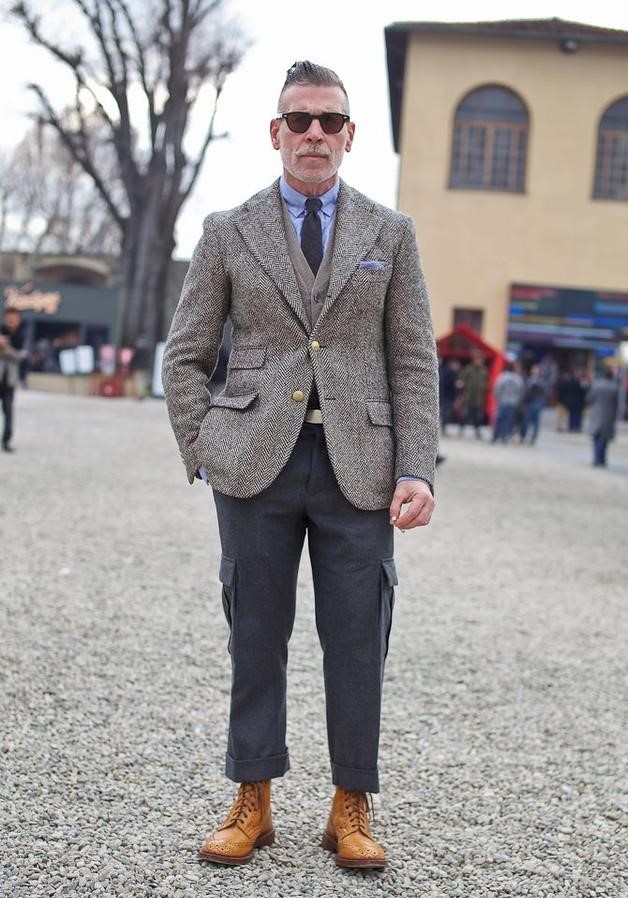 How about order shoes from china

How about order shoes from china Every year, China, the “factory of the world,” continues to send goods to the world. One of the most representative is shoes. A very striking statistic is –China already produces more than 10 billion pairs of shoes a year, accounting... read more

How to clean crocodile leather

What does a real leather dress belt look like?

Different ways to lace up sneakers

Different ways to lace up sneakers A criss-cross shoelaceShoelace technique:The lace is run directly at the bottom (grey part). While appearing through the holes at the bottom at both ends.2. Cross each other’s ends and then appear under the eyelet hole according to both sides... read more

Cap toe shoes definition The reason why leather shoes give people a sense of resistance, in addition to blaming the complicated formula of the past. And you do not know the style caused by, thought the glossy black shoes were all it was?  In fact, the leather shoes... read more

Customize your own loafers

Customize your own loafersSome people say that a man without a suit or can’t wear a suit is not an adult, only called a boy. I thought about it. It seems like that. What do you think?    If you haven’t worn a suit, or don’t like... read more

How to Start Your Own Sneaker Company (Scope, Investment, Risks, and Profit)

Expected to become a $95.14 billion dollar industry by 2025, the sneaker industry has boomed quite fast over the past decade. Also, with the growing popularity of sneaker culture, the fact cannot be denied that athletic footwear was indeed the largest revenue generator in the... read more

Making of Custom Shoes: An Insight into the Shoe-Making Process  Shoes are a key part of a human attire. If you have a look around, either rich or poor you will not find anyone without a pair of shoes. As clothes are for body likewise... read more

What kind of shoes do you wear to look gentleman

What kind of shoes do you wear to look gentleman From lean to extreme, no matter how many shoes you like to collect, at least have a pair of gentleman shoes. Because the shoe is the test representative to see a man’s achievement, credibility, social background,... read more